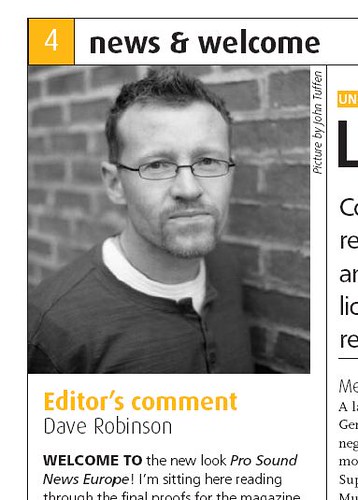 I have just seen the first of my photos in print – I did a set of photos for an old friend who needed a new mugshot for the column he writes for Pro Sound News Europe – check Page 4.

I did another batch of contact prints from my set of Large Format (LF) negatives last night, mainly because I wanted to do a reasonable set of prints of the ‘family portraits’ I did of my sister and her family before they emigrated to Australia. The plan is to get a set of decent prints and send them off to their new address.

Yesterday also coincided with my receiving a 5×4 negative holder from ebay (I have a plan to construct my own 5×4 enlarger, so a neg holder seemed like a good place to start). The holder itself had two detachable 5×4 ‘frames’ which looked like they may come in handy – as indeed they did. Placing two LF negatives on a sheet of 10×8 paper, I was able to use the ‘frames’ to both hold down the negative without using a sheet of glass, and to give a nice broad white border.

The addition of the broad border really makes a difference which is quite amazing. The shots themselves are not all that great unfortunately (if I were able to do them again, I would – using a lens hood etc. – but that’s the way it goes I guess). However, the real revelation was my first ‘still life’. The negative scan (reflective scan, so not a great start – shown here) is flat and lacking – but the print is full of bite and detail – perhaps it’s just the physical object, but I feel that it’s a promising sign for things to come 🙂

Ok, so anyone who has read any of my recent posts will have noticed that I recently got a Large Format (LF) camera. What’s LF then? Well, basically it’s a film camera Format where the negative is Large.

Of course, there are little things like the ability of a scanner to actually deal with the dynamic range of film etc. etc., so the ideal solution is to print the negatives optically, onto real photographic paper, using real chemicals to produce a silver-based image.

Now, my enlarger can deal with 35mm and 60x60mm (MF) and I can produce prints upto 16″x20″ (theoretically – the largest I’ve actually done is 16″x12″). Obviously for a given negative size, the maximum print size (whilst maintaining image quality) will vary… i.e. printing 12×16 from a MF negative will show less grain than printing 12×16 from 35mm. So, LF should give me the highest quality large prints right? Unfortunately no. Because my enlarger can’t deal with 4″x5″ negatives. Which means I have to contact print my LF negatives, which obviously produces a 4×5 print.

On Wednesday, I received the film holders for my MPP Micro Technical camera, this finally freed me up to take some pictures (having had the camera and film since before Christmas!). Ok, it was night-time, and I was using a slow film (Fomapan 100) which meant that my exposures were 2 seconds @ f8 (some front shift to get the top of the building in) and… 2 seconds @f5.6 (lots of movements on this one).
Now I’ve got my first couple of images at least (although I really need to sort out my development regime – 7’30” in Rodinal 1+50, swishing the negatives around in an open tray in the dark… This morning I loaded a couple of filmholders with a view to taking pictures of the mist along the river. Unfortunately, it’s been raining rather a lot so I ended up with a picture of reflections instead. Still, my first daylight exposure (1/25 sec @ f11), htis time developed in D76 (1+0) – still swishing film around in the dark whilst counting off seconds in my head…

I’ve just come back from my local camera club (‘York photographic society’) where we had an ‘exhibition’ – actually a couple of CD-roms of prizewinning entries to a couple of competitions. The first was the FIAP: ” FIAP 23rd Colour Slide Biennial 2004″. Now, Ok, this is a few years old now but I thought it might be interesting.

Well, kind of wrong. During a 34 minute show, with each image being on the screen for 4-5 seconds, I think that there were two photographs which I considered good. The rest were bog standard postcard images, or just plain bad (i.e. horizons which were 3 degrees out of level, verticals which weren’t etc. Y’know, basic technical stuff).

It was interesting only because of the – to my mind – staggeringly low-quality.

Then there was the something like ‘the tropical photographic competition’ – run out of Florida apparently. This time the show was 30 minutes of ‘creative photography’ from 2007.

You know when you first play with Photoshop? You load in a picture and apply the ‘watercolour’ filter? Or perhaps the ‘posterize’ filter. Perhaps you’re really avant-garde and use edge-detect. You look, and say ‘hey wow’, and then you get over it?

Apparently not. I reckon about 80% of the pictures had been posterized, or watercoloured, or had edge detection applied (or turned into an oil painting). Of those that weren’t, the rest had had a really neat ‘page turn’ effect added. Cool! Or perhaps ‘selective colouring’ had been used. Woo! Way to go. For those photographers with more time on their hands, why not motion blur the background?

In short, I was not impressed.

I had a discussion with another member of the club afterward and he basically said that if you enter competitions, you enter to win; and to win you submit pictures which you know the judges will like. And that means you look at what has done well in the past, and recreate it.

So, it seems to be ‘a renowned prize-winning photographer’ you need to lose all shreds of creativity, and just follow the herd.

That’s not for me. I’ll still enter the competitions, but I won’t be upset when I don’t win – who knows, maybe one day I might even get some useful feedback.

This is identical to the stuff which has annoyed me about music creation over the past few years; everyone seems to think that slapping a fistful of samples together over a beat which sounds kind-of-like-something-that’s-in-the-charts constitutes writing a track. Worse still, this gets perpetuated and soon all of the creativity has been squeezed out of music (the same applies to so-called manufactured bands – a couple of safe covers, a number one single and then it’s back to the dole queue for you my lad).

If it’s any consolation I now feel sufficiently fired up that I might even start doing some more music (that, of course, no-one will like).

Sorry about the rant 😉

ps: with regard to photoshop. I have no problem with it per se, but it does annoy me when people print out their latest abomination and cheerfully remark that they wouldn’t be able to repeat the picture since they ‘were just messing about’. That’s not art, that’s mindless button-pushing. A monkey could do that (an infinite number of monkeys would be able to do rather better I fear)

I now have some filmholders (double-darkslides) to go with my recently-purchased MPP Micro-Technical camera. I bought the camera at a camera fair just before Christmas and spent a few contented hours getting the shutter up to scratch and making a temporary ground-glass screen.

Having bought some film (which arrived before Christmas too) I have been champing at the bit somewhat – unable to take pictures without darkslides (I should have got some filmholders with the camera, but the seller said that he was going to send them on – they have now arrived!). This has meant that I have been able to read up on and experiment with the effects of the camera movements.

I think that this weekend I will do a few portraits of my sister’s family before they emigrate to Australia on June 22nd… and hope I don’t mess up the processing!