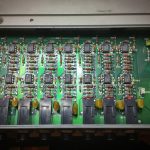 First thing to try of course was to see if it basically worked. I plugged it in, inserted a contact mic into trigger input #1 and tapped it. Bingo! The trigger LED lit on the front panel. Repeated for inputs 2-8, and the story repeated (so at least the trigger inputs worked). I then plugged the MIDI output into my laptop and repeated the tapping — excellent; all inputs caused a MIDI output. RESULT! 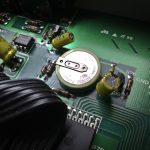 ally worked, now to turn my attention to the rest. One thing I did notice during the initial testing was that the settings were not being retained over the power-off/on cycle — the internal memory-backup battery was obviously feeling it’s 30+ years, so that would need replacing as well. 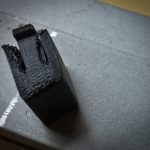 Now, the buttons. Having got a 3D printer for Christmas, I thought I’d make a new one. Using OpenSCAD, and a pair of calipers to measure one of the existing buttons it took 3 iterations to get one sorted out. I ended up printing a pair because one of the buttons was a little scuffed. 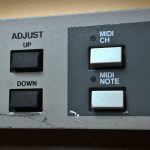 A bit of sanding later (I may well return to make a better job of this, but that’s easy!) and I’ve got two black buttons in the panel… I figured that the Adjust buttons were distinct enough (functionally) to support being a different colour! 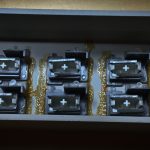 The buttons have a slightly convoluted profile at the back; one is to actually press the switch on the panel PCB, the other lumps are to press against the grey plastic ‘springs’ above and below the button. This took a bit of observation and a couple of iterations of the button 3D model!

The front-panel glass display was simply glued back in place — time will tell whether the glue I’ve used was sufficient, but it’s holding for now. 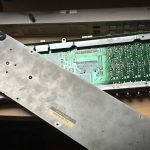 The final repair step was to replace the back up battery. Fortunately, the base of the case just swings out of the way once the screws around its edge have been removed. I avoided having to do that much disassembly at all really, so that strikes me as some good design work by those ’80s Akai engineers! 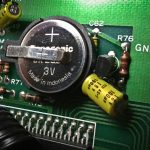 So, that’s that — the last cosmetic step was to straighten out the bent rack ear, but that just required a measured amount of brute force to bend it back in shape (no hammers!); it’s straight enough now. I now just need enough spare time to work out how to integrate it into my music setup…