If anyone would like to have me work on a particular photographic assignment, please let me know via the Contact Form. So far, I have carried out a single assignment for a friend (portraits of their pet greyhound) which has been very well received (there’s no point in spouting a load of BS at this point, I’d only get found out).

Since my experience is low, so the prices are too – I’m pretty much doing this to build a portfolio. Heck, if the assignment is interesting enough I may even do it for nothing… or at least just for expenses.

Depending upon the subject matter, 35mm or medium-format would be used. A full contact sheet would be provided, and from that a number of 10×8 shots can be selected.

So, if you think you might like some photos taken (As is usual for me, this would be using black-and-white film), please ask away.

So. The Ixus. Fantastic, so I got another one – and so far it hasn’t been stolen. Unfortunately, the APS film format now seems to be dying out – it never did kill off 35mm with it’s user-convenience being outweighed by the smaller negative and more costly processing.

Of course 35mm (the 135 format) didn’t kill off roll film – 120 film, with its 6cm square negatives is still very much alive and kicking about 100 years after its introduction. Reckon we’ll still be using Compact Flash in 2094?

So after a few years, digital inevitably reared its head, and in 2003 we bought a Canon Powershot A40, which is still my only digital camera (I don’t count the camera in the phone). The A40 was rather liberating in that it allowed us to take hundreds of pictures without a care for the cost of processing – however what that actually meant was that we hardly printed any pictures at all!

Then there was video. I had an idea that I could start making music videos (and I have done – see elsewhere on the site), so I bought a Canon MVX250i. It does widescreen, has firewire, and can take half-decent stills (and has a monster optical zoom too).

And video prompted Super8 (I know, but I was looking for a different angle for shooting movies) and only 3 minutes and 30 seconds of film – not reusable like video of course.

This was actually liberating – rather than videoing everything, Super8 meant that I was selective – which is much easier to deal with in post-production! And after shooting movies on film, it seemed logical to go back to taking stills on film too, and a local freecycler provided me with two Yashica SLR Bodies (an FX-3 and an FX-D), along with 5 lenses. The light seals and body-covering were shot, but ebay provides, and soon I had two perfectly functioning cameras (the FX-3 can even do without batteries).

Since then I’ve acquired more cameras (including some medium-format cameras using the above-mentioned 120 roll film – very nice results) and basically home-processed a load of black and white films and prints. I guess I’ve come a long way since the instamatic…

As mentioned in a previous blog entry, I used to get the NME every week, along with Melody Maker or Sounds, or any number of other music papers. Now, being someone who keeps hold of things for more than just the week of release, I now have boxes and boxes of old music magazines/papers.

But where? They don’t sell on eBay, and there don’t seem to be outlets for this kind of stuff as there are for comics (which I also have some piles of).

I suppose that I should just face up to the fact that I have lots of stuff that no-one else wants or needs, and that taking them all to the tip would be by far the easiest thing to do. But I feel that there must be some value there – and it would be nice to get some cold, hard cash…?

Any ideas would be gratefully received – either by commenting here, or via the Contact page.

Just a note for anyone wondering where my ‘myspace’ pages have gone (oooh, I bet there are loads.): Well, I have just cancelled my accounts (namcom and minimism). It’s not like I spent any real time on there, and it was just another thing for me to feel guilty about.

There was nothing there couldn’t already be found via google/youtube anyway.

Sometimes I wonder what goes on in the heads of people, and wonder whether there should be some credo like Google’s “Don’t be Evil” for the general public.

Something like “Don’t be a C***” would probably do.

A case in point: Me and the family went off cycling into town on Saturday using the cycle path which runs along the river. On several occasions, there were groups of people walking along the path. No problem you may think, well they were spread four-abreast and blocking the entire path. Ringing of bells had no effect, and so we were forced to bump up onto the grass (managing to collect some dogsh** in the process, but that’s another RANT) to move around these mobile roadblocks.

A little while later, there’s a group of about 8-10 people just standing around yacking, similarly spread all over the cycle/footpath. Ringing of bells at least gets some response (i.e. they look up), but they don’t actually move. They just stand there, presumably wondering what we’re going to do. Well, my daughter and me manage to pick a path through them (muttering), whilst my wife and son have to get off (my son is only 5 and is not as good at manoeuvring his bike as the rest of us).

Also, cycling through town – parts of it are fully pedestrianised between 10AM and 4PM, but outside of these hours, STUPID BLOODY PEOPLE still insist on walking in the road. DESPITE there being cars and lorries on the road, I (as a cyclist) still get verbal abuse for riding my bike in the road.

This photography lark might be getting a bit more serious… I’ve just joined York Photographic Society, enrolled on an evening class (‘The Art of Photography‘), and subscribed to Black and White Photography magazine.

For years now (must be at least 10?) I’ve been a subscriber to The Wire. This follows up a youth of religiously buying the NME, Melody Maker and Sounds (mid ’80s to the mid ’90s if that kind of thing matters) along with the odd issue of Record Mirror, Jamming, and a whole heap more. During this period first Sounds, and then MM shut up shop, and the NME started to become less relevant, so eventually I became an ex-reader.

Then I got more interested in some of the more outsider music, and hence The Wire became something of a staple. I also picked up other magazines of course – a few years back it was Careless Talk Costs Lives – a harkening back to my MM days through the presence of Everett True, then Loose Lips Sink Ships – Steve Gullick‘s vehicle – and also many, many issues of robots and electronic brains (to which I contributed a fifth of the cover CD through my fledgling minimism record label – including two tracks by namke communications).

Anyway, all of this rambling is kind of a send off to my Wire subscription which I am planning to let lapse when it finishes in November. Basically, I’m just not reading it any more – lack of time mainly, but also none of the music is new and/or fresh any more (I’m so old and jaded that I feel like I’ve heard it all before).

Am I so old and jaded that I have heard it all before? No, of course not – I picked up Plan B last month, and the writing and enthusiasm got me interested in music again. The cover CD was very good as well – in fact I keep listening to it. Every track. This month’s issue is also great, as is the CD.

Having said that, the photos of Robert Wyatt in the October issue of The Wire are absolutely stunning – need to hunt out Jake Walters work, that’s for sure…

So, there you go. Goodbye Wire, Hello Plan B. Just thought I’d share…

(This all coincides with me picking up Smog‘s A River Ain’t too much to Love last weekend – and that really blew me away… Ok, so it’s three years old, I’ve got some catching up to do obviously.)

My first camera was a Kodak Instamatic 177X which I was given for a present (Christmas I think) when I was something like 9 years old. This was a fixed-focus camera with ‘cloudy’ and ‘sunny’ settings, and using 126 cartridge film. If it was too dark, extra light could be supplied by ‘magicubes’ – little plastic items containing four flash bulbs. The pictures (when they’d been developed and you’d got them back from Boots) were square which, looking back at them, seems a bit odd.

This was my main camera until some time in the mid-80s when I upgraded to a Canon AF35J – motor wind, (and auto focus if I remember correctly). Unfortunately, the camera died some time toward the end of the decade, whilst the Instamatic still carried on being used.

Now, the next camera I remember getting was a Canon Ixus in 1998 (a graduation memento), so I either kept on with the Instamatic, or there’s a camera in there that I’ve forgotten about.

I absolutely loved the Ixus. Ok, so the APS film format is not going to give me the best prints, but the sheer size (or lack of it) meant that I carried it around all the time: “The best camera is the one you have with you”…

Unfortunately, the camera was stolen in a burglary on our house in 1999. I obviously should have been carrying it around more…

If I was just a musician, this would be called a discography. I’m not, so it isn’t. Here’s a list of stuff I’ve done in the past:(not yet complete!)

Web sites:
I have taken to using drupal to build all of my sites as it allows the customers to edit and create content without any huge complications… 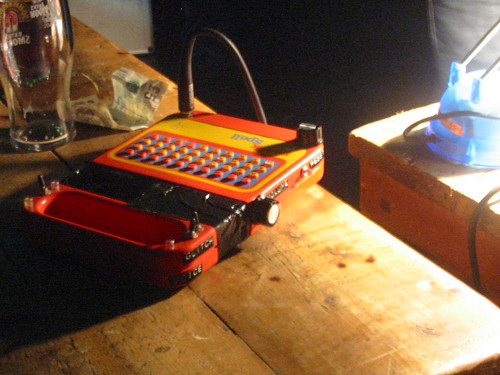