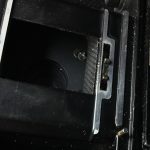 During my initial appraisal, although the shutter was not firing, I at least discovered how to cock it: there’s a little cog which engages with the film sprockets and as the film is wound on, the cog turns and cocks the shutter. Kind of neat, but it might have been a better idea to have a more direct connection I think!

Of course, whilst I’m taking it apart, I keep cocking the shutter, and clicking the shutter button to see if anything new happens, and eventually I see the shutter easing open, and then (miraculously) it starts firing ‘properly’. The speed-select appears to work as well, so it’s not completely dead…

First things first: I did a search online for a service manual, and found one over at Elektrotanya.com, so that was handy (Canon Dial 35 service manual). Following the instructions, I then started on the disassembly. The front comes apart fairly easily when you follow instructions — the early steps can be seen in the animated GIF here 🙂 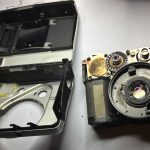 So, now onto the rest. Following the service manual, eventually the case comes free from the chassis — I think someone may have been in here before because there’s evidence of interference with screw heads. Also, the pair of wires to the flash socket are not connected (another job to add to the list). 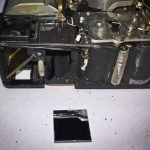 Taking the easy task first, I thought I’d fix the broken bright-line viewfinder. As can be seen in the image to the left, there’s a periscope-like arrangement, and the bottom full-silvered mirror was not fixed in place. In this picture you can also see evidence of the plague of cameras this age — dissolving foam! 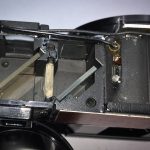 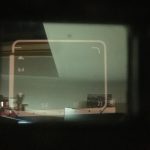 Anyway, a small dab of epoxy found the mirror back in place and operating as it should, so that’s one job ticked off the list at least.